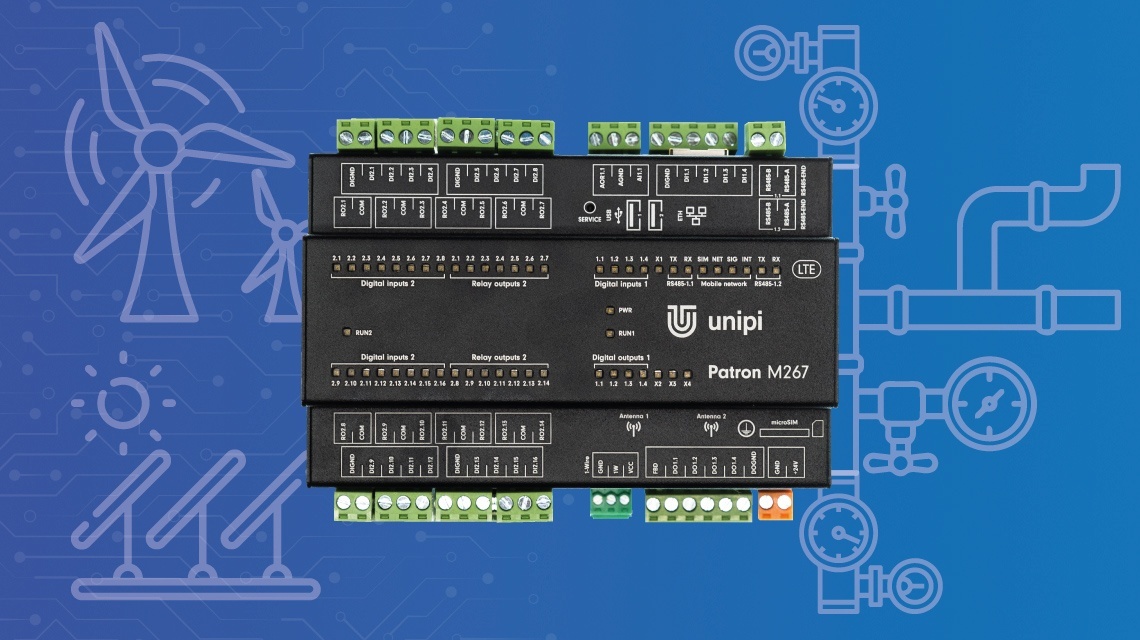 Units with LTE modem have diverse use across the industry 4.0 and IoT, get inspired by practical examples.

Smart grids are a series of interconnections of various smart devices (e.g. generators, safe mechanisms and meters), which are mostly distributed across large areas (solar power plants, gas pipelines, water management, etc.). It is seldom possible to connect such remote sites directly, using serial lines or Ethernet. With the development of these smart grids, LTE (Long Term Evolution: wireless mobile network communication) technology has found its place in Industry 4.0. LTE technology, along with effective security management and an optimized design, has the capability, and most importantly the capacity, to be used in industrial data applications, IoT, and overall in industry 4.0.

Therefore, you will find Unipi Patron LTE units among our products, which are ideal for the smart grids needs. Patron controllers are powered by an Unipi-developed computing module based on the NXP i.MX 8M Mini quad-core CPU with a maximum frequency of 1.8 GHz, 1 GB RAM, and onboard 8 GB eMMC memory to provide high computing performance and reliability. With an LTE modem that allows the PLC to use a wireless LTE network to connect to the Internet, we offer three models: Unipi Patron S167 LTE, M267 LTE, and M567 LTE for a wide range of applications and even the most demanding projects.

Get yourself inspired by our three use cases of Patron LTE.

1. Remote monitoring and management of a wind farm

Large fields of wind farms are generally less efficient, so we usually find smaller fields that are effectively interconnected. However, such a network requires extensive monitoring and supervision of the entire system.

The local site surveillance controls the operation of the system of individual wind fields, which are connected to the Unipi Extension xS51 modules and controlled by Patron M267 LTE units. Patron units are securely connected to the Internet, which is made possible by the LTE technology. Via this connection, they send data to Mervis SCADA, to which the remote control center has access. Thanks to this system it is possible to monitor using one platform e.g.:
In addition, Mervis SCADA allows data to be stored in a database and analyzed, for example for performance and efficiency needs. 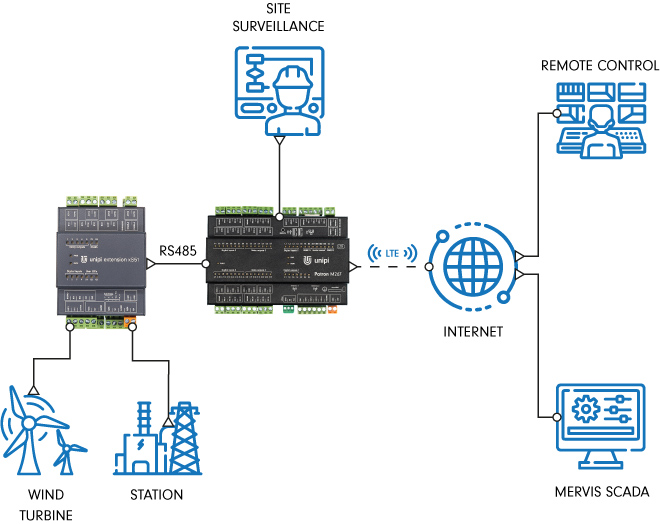 2. Wireless monitoring of toxic gas in a large area

The international gas producer connects twenty production sites by extensive pipelines, which are up to tens of kilometers apart. In addition to security mechanisms at each location, producer also wants to have an overview of the entire system status and any possible failure.

Intelligent gas meters are installed at production stations, which record gas flow, temperature, and pressure in the gas pipeline. The meters communicate with local PLCs via the Modbus protocol and these controllers are connected to the Unipi Patron S167 LTE. Patron units send data to the remote control center and to Mervis SCADA at regular intervals. Producer then: 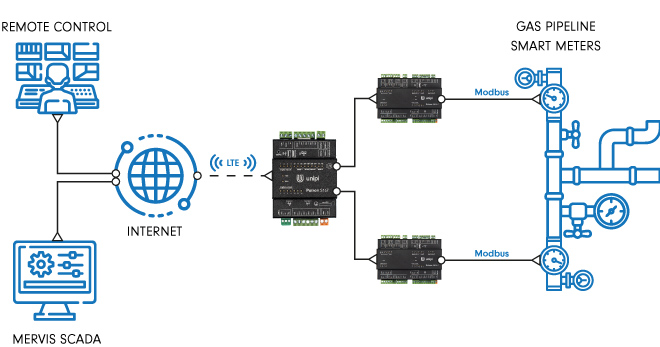 3. LTE as backup connectivity for control, management, and monitoring of solar power plants

For maximum efficiency of solar power plants, it is critical that its infrastructure works in complete synchronization. Major components, such as solar panels, inverters, and energy transmission or storage systems, need to be fine-tuned to keep electricity generation rates within acceptable levels and meet pre-set plans.

The operator of three large solar power plants decided to synchronize all major components using Unipi units. Each of the solar power plant is controlled and monitored by PLCs developed as part of our custom development program as solar controllers. These LTE Patron S167 units send all data via Ethernet to site surveillance center using Mervis SCADA. Because the project placed great emphasis on maximum efficiency and smooth operation of the entire infrastructure, the units will automatically switch to the LTE connectivity in the event of an Ethernet outage. This connection allows: 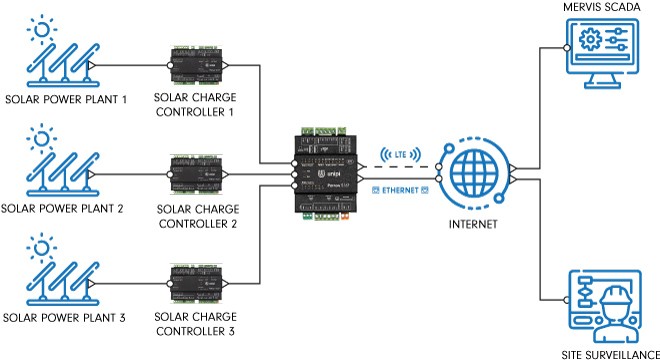 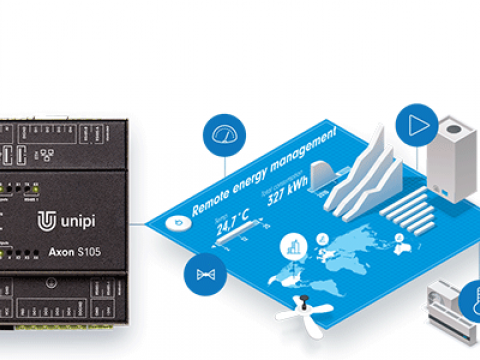 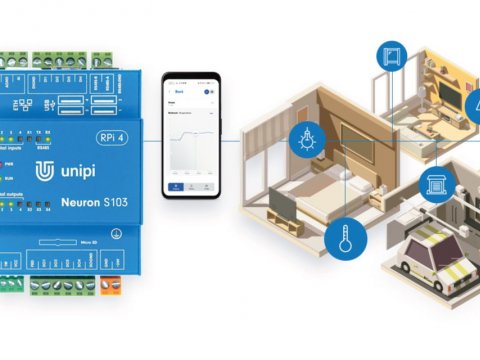 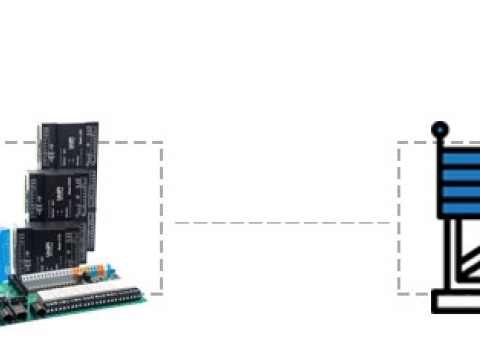 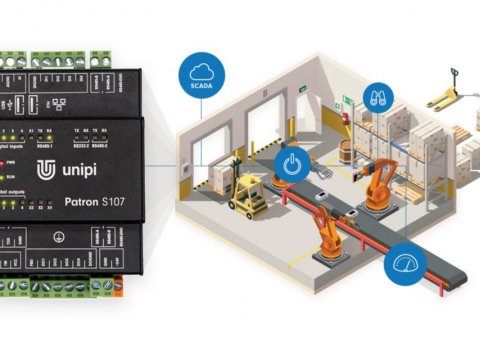