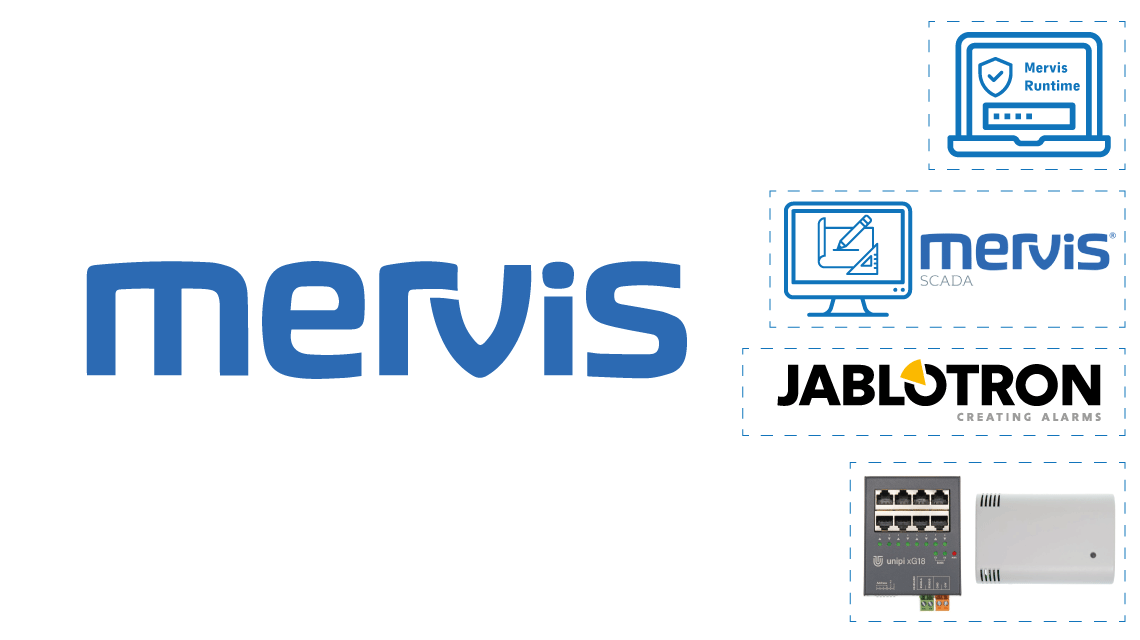 Mervis is a professional software platform provided for free for each Unipi controller. It is a full-fledged platform suitable for a wide range of applications, from smart home control to industrial automation. The Mervis IDE, the core of Mervis system, is a development environment for creating, debugging and management of control programs for Unipi PLCs that is suitable for both experienced and less experienced users thanks to its user-friendly interface. Mervis IDE also contains an HMI editor for creating and editing of web user interfaces and a visualisation editor for the Mervis SCADA service. Aside from the IDE, the platform offers the Mervis Cloud - a package of online services consisting of the Mervis DB database for data storage and analysis, Mervis Proxy for secure remote access to controllers, and Mervis SCADA interface.

Availability of the individual parts and how to obtain them 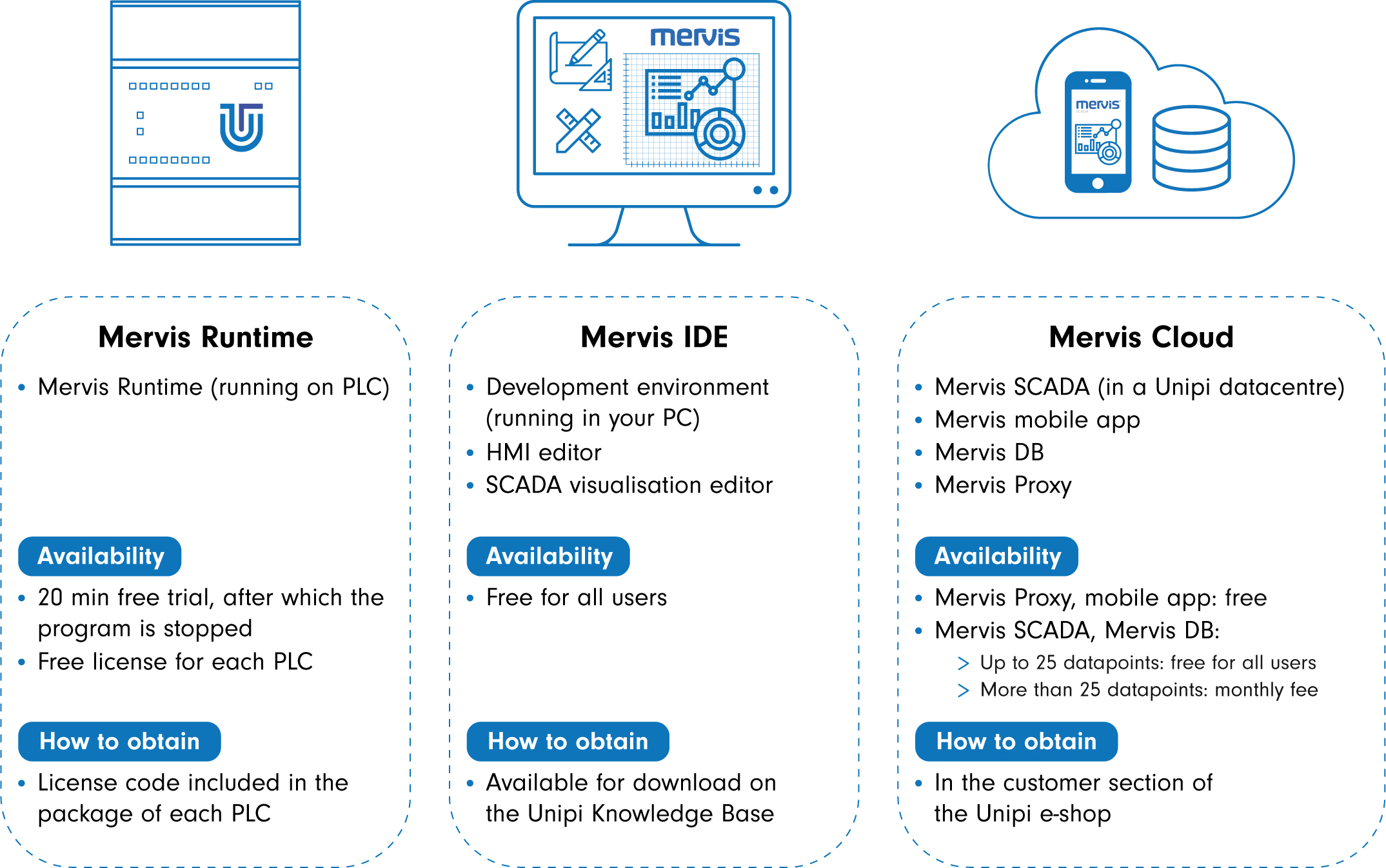 Licencing tutorial is available on this link.

No less important is the new visualisation editor for the Mervis SCADA cloud service. The editor comes with a large collection of indicators, switches and other graphics features that can be placed simply by drag-and-drop. Thanks to wide configuration options you can customize each graphic element to suit you or your customers. Complete interfaces can be accessed either through a web browser or using the Mervis mobile app.

Do you use the Jablotron 100 ESS and you need to integrate it into a Mervis project? The Mervis IDE 2.3.0 allows you to connect the Jablotron 100 control module with an Unipi controller using the JA-121T gateway. This combination significantly expands the potential of controlling your house or facility. Section and peripheral states in the Jablotron system can be used for heating optimization or disconnecting your house from the electric grid in emergency situations.

BACnet protocol implementation in both server and client mode

The Mervis IDE 2.3.0 also introduces full software support for the Unipi Extension xG18 - a simple and reliable Modbus RTU extension for reading temperature from up to eight 1-Wire temperature sensors.

Apart from that, full support for the new RW-TH/THC and RLW-TH/THC interior air quality sensors was added. These compact sensors, soon to be available on the Unipi e-shop, communicate using RS-485, Wi-Fi or LoRaWAN and can be used to measure temperature, air humidity, VOC, barometric pressure or CO2 concentration.

A useful feature is support for secure communication using the SSL cryptographic protocol. This function is useful mainly for secure connection to controllers via Mervis DB, Mervis Proxy or Mervis SCADA services. SSL can be also used for the native SSCP protocol used by the Mervis IDE for all communication with controllers (project deploying and debugging, configuration).

Sending e-mails through the SSL

Mervis IDE allows you to configure controllers for sending notifications and alerts via e-mail messages. These can be now also secured by the SSL protocol, which is currently a standard for the most of e-mail service providers.

We will focus on the above-mentioned new features in upcoming articles. However, these are not the only new features present in the Mervis IDE 2.3.0, as it will also offer you:

The Mervis IDE 2.3.0 installer and the corresponding Mervis OS image are available for download on the Unipi Knowledge Base. 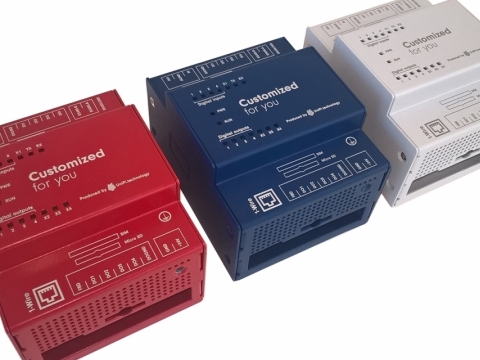 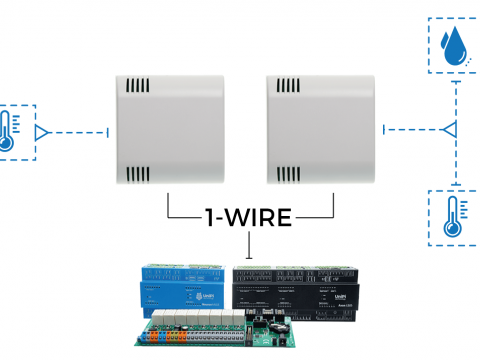 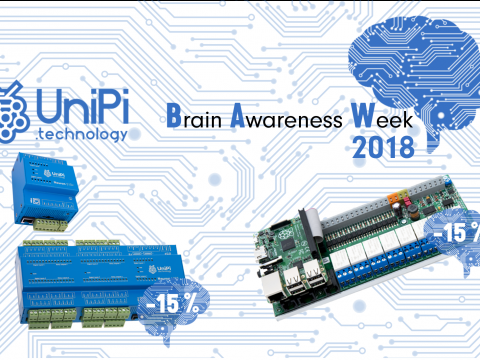 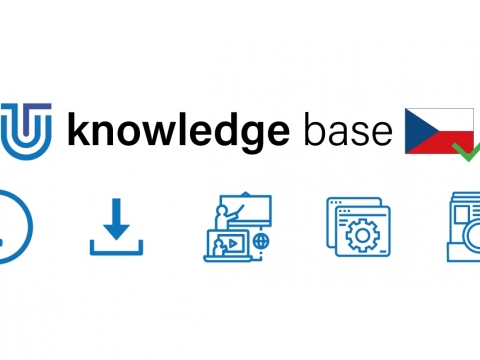